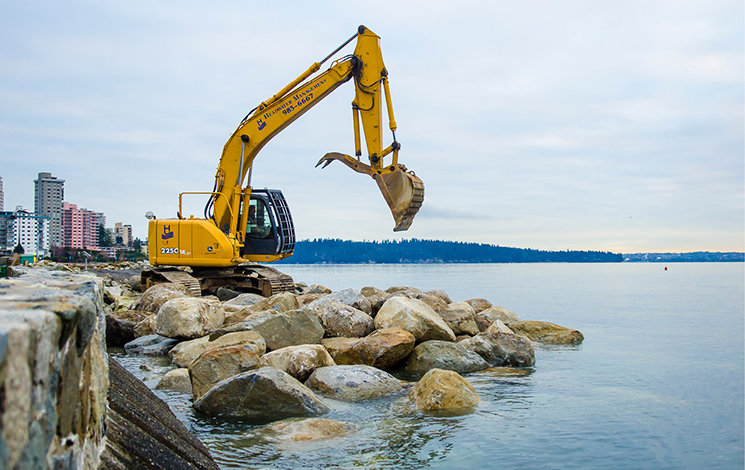 West Vancouver is committed to enhancing and preserving its waterfront and natural habitat. To do this, we are conducting work on the foreshore as part of the Shoreline Protection Plan program.

View more on the steps being taken to protect and preserve the District's foreshore:

What is the problem?

A natural shoreline is slowly altered by a range of processes, including the ebb and flow of tides and wave action and currents, which move sediments along the shoreline. When the supply of sediments to the shoreline is reduced or wave energy increases, these processes can become unbalanced, resulting in the loss of shoreline.

Before the arrival of European settlers, this area was blanketed with thick vegetation that absorbed rainfall and inhibited erosion. A network of creeks and streams carried sediments from the mountains to the waterfront. The sediments fed and replenished beaches while waves and currents redistributed material along the shoreline. Loss of this sediment has made beaches narrower as more waves strike the sea wall, worsening erosion. Piers, wharves and other structures block the natural movement of sediments along the shoreline.

What is the District doing?

The District is undertaking a series of projects to protect and enhance the foreshore. Most of the work involves placing large boulders below the low tide (sub-tidal) and within the high and low tide (inter-tidal) zones. The boulders then create reefs that reduce the impact of energy from waves and currents. The supply of sediment to the foreshore can be retained, restoring natural marine habitat both under the water and on the shoreline.

The enhanced foreshore will create habitat opportunities for native marine life. It will also protect West Vancouver’s waterfront infrastructure, including the Seawalk, protecting and enhancing the natural beauty of our waterfront community. All work is carried out under the direction of certified professionals and appropriate government approvals.