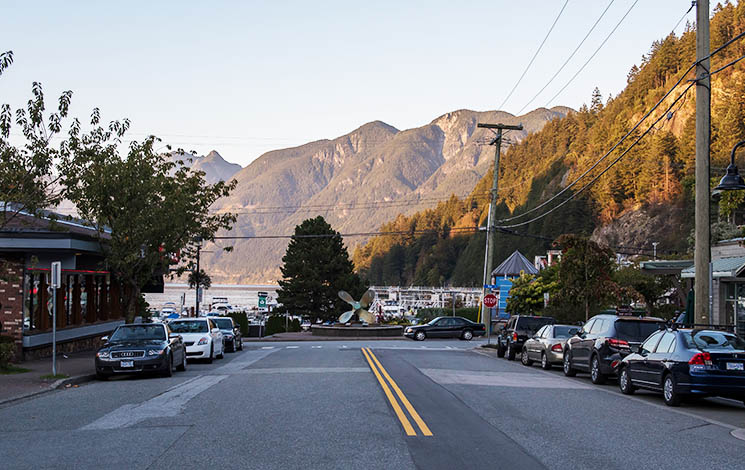 Project updates about the Horseshoe Bay Streetscape project are posted online every week:

UPDATE MAY 28: The 90-metre section of the bike lane on Royal Avenue between Bruce Street and Bay Street continues to be closed to bicycles and will remain closed on a temporary basis, until such time that it can be integrated into a more extensive, connected cycling network.

As an interim measure, the District will install temporary furnishings such as planter boxes, or possibly seating areas to allow the bike lane to be utilized as a public space.

The District plans to engage and consult with the community on Phase 2 in early 2022.

Upgrades to Royal Avenue between Bay Street and Bruce Street will include installation of new sidewalks, lighting, plantings, curb bulges and asphalt pavement.

A separated northbound bike lane will be installed on the east side of Royal Avenue, with no impact to existing parking spaces.

In addition, preparations have begun for the undergrounding of hydro poles in the Horseshoe Bay commercial area, including Royal Avenue, Bay Street and Bruce Street.

The Horseshoe Bay Streetscape Plan is a cohesive and unified streetscape design strategy to revitalize the commercial area of Horseshoe Bay Village, which hasn't been upgraded on a large scale since 1986. The intention is to enhance livability, strengthen economic activity and create a vibrant area where local businesses can compete with other retail centres.

The Horseshoe Bay streetscape improvements will be phased and will coincide with construction of the Spirit Trail to minimize impacts on residents.

The streetscape improvements will:

Learn more about the Spirit Trail along Royal Avenue

An information meeting was held on April 24, 2018, for residents to learn more and ask questions about plans for the construction of the Horseshoe Bay Streetscape and Spirit Trail along Royal Avenue. Over 50 people attended the open house and provided input into the draft design.

This input has been summarized and will be incorporated into changes to the design.

The District has summarized the feedback received from residents in a question and answer format in the document below.