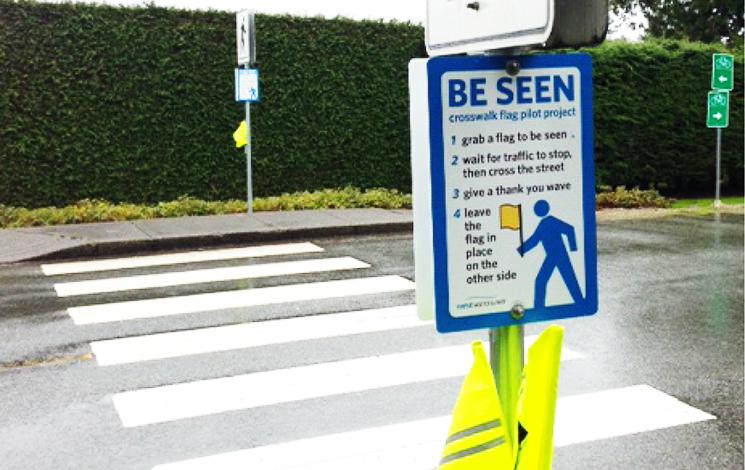 Some communities have successfully used hand-held crosswalk flags to improve visibility and safety of people walking at crosswalks. West Vancouver is implementing crosswalk flag pilot projects to explore this as an option for our community.

Crosswalk flags are a simple, inexpensive tool to help people be extra visible when crossing the street (especially in rainy weather or at night).

Flag use is optional. People are not required to use a flag to cross the street.

Yellow flags, flag holders and signs are placed at either side of the crosswalk.

To use the crosswalk flags:

If the crosswalk flag pilot proves to be beneficial, crosswalk flags may be considered for other pedestrian crossings in the community.

When driving, be sure to do your part and always look for and yield to pedestrians.

The first pilot site was a crosswalk located at Mathers Avenue and Thompson Crescent, near West Bay Elementary. Flags were installed as part of a collaborative outreach effort between the District, West Bay Elementary School, West Vancouver Police and parent volunteer crossing guards.

The District installed more permanent pedestrian safety measures near West Bay Elementary School in mid-April. The intersection of Mathers and Thompson Crescent has been converted to a three-way stop.

Although very well-received by parents and students at the school, crosswalk flags were removed when stop signs were installed. Flags cannot be attached to stop sign posts because they may prevent people from seeing the stop sign.